The moment has finally arrived. Your Bun Bo Bae has your back. This is my family’s recipe for bún bò Huế, or spicy Vietnamese beef noodle soup. It’s a noodle soup that hasn’t quite made it in the mainstream like phở has. Phở’s ingredients aren’t quite as unfamiliar: sliced lean beef and a mild broth with noodles. Bún bò Huế, on the other hand, has pig feet and beef shank. If you’re unfamiliar with these ingredients, it’s understandable to feel a little reserved. But trust me, this soup will rock your world. The broth is spicy and fragrant, with a ton of lemongrass and chile peppers. I wouldn’t have named myself the Bun Bo Bae if I couldn’t vouch for how delicious this soup is!

Bún means vermicelli noodle in Vietnamese. Bò is beef, and Huế is a city in central Vietnam. So all together, bún bò Huế is a spicy Vietnamese beef noodle soup Huế.

Huế was the Vietnam’s capital during the Đàng Trong Kingdom from 1738 to 1775 and of the Nguyen Dynasty from 1802 to 1945. One of Huế’s most beautiful attractions is its imperial city, which is full of palaces and shrines to former Emperors.

I love the food in Huế, because my mom’s side of the family is from this region. A lot of food from the region is spicy, and this noodle soup is no different. I like to top each bowl of noodles with some of my homemade Chile Lemongrass Sate, or Tương Ớt Sa Tế, to give each bowl a boost of spicy lemongrass flavor.

The vermicelli used in bún bò Huế is larger than you’ll find in most noodle soups. Find a rice vermicelli that is about the size of spaghetti.

Since we’ll be making the bone broth for the bún bò Huế from scratch, we must start by par-boiling the meat. I’ve talked about par-boiling before in multiple recipes, like my bún riêu/ crab noodle soup or my crockpot pork sparerib soup. By boiling the meat, draining and rinsing, you get rid of all of the scum and impurities, resulting in a cleaner, clearer broth.

For this broth, we’ll be using two types of meat: pork feet (or pork hock) and beef shank. Both of these are tough cuts of meat, which is why the broth must be cooked for so long.

It might be hard to find beef shank unless you go to an Asian supermarket. If you can’t find it, beef brisket is a good substitution.

Par-boiling is easy. Simply submerge the pork feet and beef shank in water with a handful of salt and bring to a boil. As soon as the water boils, drain and rinse well.

After rinsing the meat, add it back to a large pot with water. Add some large chunks of lemongrass and a shallot to flavor the broth.

Use the thin, green parts at the top of the lemongrass stalk. This part is tougher. Chop the more tender bottom part up finely with knife or food processor.

Keep the broth simmering for 2-3 hours. Do not let the broth get to a rolling boil. Simmering ensures the broth stays clear. Boiling would emulsify the fat into the broth, making it cloudy. If you see foam or scum rise to the top of the broth, use a ladle to skim it off.

If too much broth evaporates, add more water as necessary. Do NOT put the lid on the pot, however. That will cloud the broth.

1-2 hours in, take all of the pork feet out. These will be added back in when the broth is seasoned, so they must be taken out early or else they’ll become too soft. The beef shank will stay in the broth until it’s tender, about 2-3 hours.

After the beef shank is tender, remove them and let them cool before slicing thinly. You can put them in the fridge overnight, which will make them easier to slice extra thin.

Discard the lemongrass and shallots as well. At this point, you can strain the broth into another pot using a sieve. This will remove any bits of lemongrass or shallot that were too small to pick out, but this step is optional.

Add the pork feet back into the broth and add Bún bò Huế bouillon cubes. Bảo Long is my family’s favorite brand. You’ll find this at any Asian supermarket, but they’re also available online.

Bring the broth back up to a boil with the bouillon. Meanwhile, heat up some oil in a small pan and add the chopped lemongrass from before. Heat this on low until it’s fragrant, about five minutes. Then pour all of the oil and lemongrass into the broth.

Add more oil to the pan and heat some chile flakes this time. After about 30 seconds, when the chile is fragrant and the oil is a beautiful red color, pour a ladleful of broth into the pan. It will boil and bubble immediately. Pour the broth back into the pot, being careful to leave any seeds behind.

To bring out the color of the broth and add an extra kick of spiciness, finish the broth with a spoonful of chile lemongrass sate, or tương ớt sa tế. If you can’t find a sate with lemongrass in it, any type of chile oil will do. If you’re feeling ambitious (which you must be if you’re cooking this soup), make your own with my recipe.

Taste the broth and season with fish sauce and salt to taste if. I added about a tablespoon of fish sauce, but it doesn’t always need it.

What to serve with Bún bò Huế

The banana blossom provides a nice mild crunch, with a uniquely subtle fragrance. To prepare it, simply slice it thinly and drop it into a bowl of water with the juice of one lime or some vinegar. The acid will prevent it from browning.

If you can’t find banana blossom, purple cabbage sliced thinly will work too, but the flavor will be a little different.

The rau răm should be served both chopped finely along with the cilantro and scallions as well as on the side in whole leaf form. Simply remove the leaves from the tough stems and chop finely.

Bún bò Huế is also often served with chả lụa, a type of Vietnamese pork roll, and huyệt, or pork blood cubes. My family doesn’t like to add these.

The vermicelli that you buy should look like spaghetti, but paler. These noodles will take more time to cook that spaghetti though. After you’ve boiled them according to package instructions, make sure to rinse them thoroughly to get rid of any starch. This will prevent the noodles from making the broth thick and cloudy.

To assemble a bowl, simply add some banana flower to the bottom of a bowl. Top with the vermicelli (cooked according to package instructions), sliced beef, and chopped herbs and scallions. Add a few pieces of the pork feet from the broth as well. Then, layer boiling broth over everything.

Lime can be squeezed into the broth for a pop of acidity, and extra chile lemongrass sate can be spooned on top for those who love spice.

This spicy Vietnamese noodle soup actually tastes better the next day, after the flavors have gotten time to meld together a little. Since it takes so long to make, it’s a perfect project to make to have noodles for breakfast the next day! In fact, in Vietnam, noodle soups are often eaten as breakfast foods. 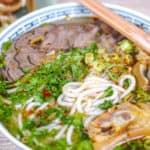 Assemble a bowl of noodles

Did you make this recipe? Tag @bun.bobae on instagram and hashtag it #bunbobae to be featured!

I’m a journalist, professional amateur baker, noodle enthusiast and food photographer living in Washington, DC. My immigrant parents taught me everything I know about Vietnamese home cooking, and now I want to share it with you! Learn more about me!