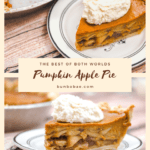 I cannot get through the fall season without making at least three of these pumpkin apple pies. The pie offers the best of both worlds: A layer of tart apples flavored with cinnamon and a creamy layer of pumpkin pie. Try this for your next Thanksgiving dinner. You'll never go back to plain pumpkin or apple pie again!

The best apples for pie

I like using Granny Smith apples for pie. Since they're tart, they hold up to the addition of extra sugar well without being too cloyingly sweet. They also retain some of their original texture when cooked, so the pie does not become mushy.

Why combine pumpkin and apple?

Pumpkin pie used to be my favorite type of pie, with apple being a close second. I love the mix of ginger, clove, nutmeg cinnamon and allspice in pumpkin pie, but it can be textually boring. The tart apples cut the sweet pumpkin custard well and add a bit of texture to the pie. And that's why pumpkin apple pie is the perfect combination!

Cut butter into small cubes and freeze for about five minutes

Whisk flour and salt together well. If you have a food processor, you can combine the flour and butter and pulse until the mixture becomes fine like sand.

If you don't have a food processor (like me), squeeze the cold butter with flour between your fingers until you get a similar texture. It can be helpful to put the ingredients in a chilled bowl to keep everything cold.

Add 1-2 tablespoons until the pie dough just comes together. It will be rough and craggy, and there still may be some flour left in the bowl.

Dump the dough and excess flour out on a work surface and work into a disc. Wrap in plastic wrap and chill for an hour or up to two days. You can also freeze this until ready to use.

Melt butter in a large skillet and add brown sugar, cinnamon, corn starch and water. Heat until the mixture has thickened.

Add peeled and sliced apples to the cinnamon sugar mixture and cook on medium heat until the apples are soft and flexible. Set aside to cool.

Roll the pie dough out until it is about a quarter of an inch thick. You want to have some dough hanging off of the side of your pan so you have room to crimp it.

Make sure your pan is greased before adding the pie crust. To do this easily, wrap the crust around your rolling pin and then unroll it on top of the pie pan!

Crimp the edges of the dough and add the apples. They should be pretty soft at this point, so flatten them out as much as you can in order to layer the pumpkin on smoothly.

Pour the pumpkin custard over the apples and bake for about 50 minutes, or until the pie is set.

This pie tastes great cold or warmed up. I personally prefer it cold, with whipped cream. For warm pies, I recommend serving with a scoop of vanilla ice cream. 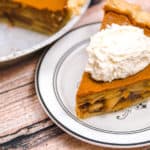 Assembling and baking the pie

Did you make this recipe? Tag @bun.bobae on instagram and hashtag it #bunbobae!